Azure WebJobs are a part of the App Service from quite sometime now whereas Azure Functions are recent addition to the azure service offering.  This article is going to cover the briefs between bot the services. If you’re not familiar with the offerings  by both the services I request you to go through the WebJobs and Azure Function article and come back here to do the comparison as this article is intended as a quick cheat sheet to cover the differences between the two. 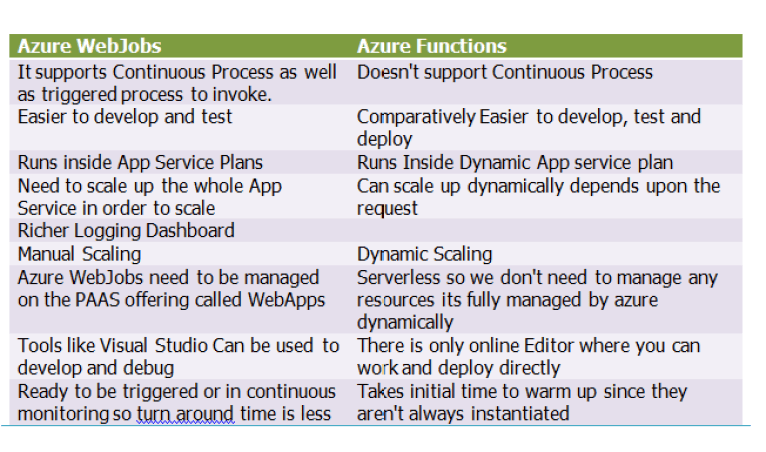 The most significant difference between Azure Functions and WebJobs is the ability to deploy Functions on the new Dynamic Service Plan. With this service plan, you can have the advantages of not worrying about the underlying instances or scaling, it’s all managed for you. This also means that you only pay for the compute resources you actually use. However, when needed or when you are already paying for an App Service Plan, you have the option of squeezing in your Functions in the same instances and avoid additional costs.

Coming back to the original question, which technology suits better your requirements? I would say that If you prefer a “serverless” approach in which you don’t need or want to worry about the underlying instances and scaling, then Functions is the way to go (considering you are OK with the temporary lack of mature tools). But if you still favour managing your instances, WebJobs might be a better fit for you.

In a nutshell WebJobs and Functions are capable of doing similar stuff with similar power but the deciding factor out of two comes out in terms os manageability, If you want to manage your own custom service then WebJobs otherwise Functions are the way to go.

One thought on “Azure WebJobs Vs Azure Functions – which one to choose?”