During the second day of Build Conference 2016, Microsoft previewed an Azure Service called Azure Function. Azure Function is basically the Microsoft’s answer to AWS Lambda which actually previewed last year, so it took around 1 year for Microsoft to offer his quota of Serverless Application.

Before moving ahead with Azure functions, let’s us take a step back and talk about what is Serverless Application. The idea of Serverless Application excited me when I first heard about it last year. As we know, Companies develop apps and deploy it on the servers or in the cloud but that requires resource management like storage, database, bandwidth etc but Serverless application takes care of that. Serverless Application is basically a marketing term with a technical concept. Functions isn’t a breakthrough to a whole new era of computing. It’s more accurate to call Azure Functions as a platform to build non-server centric applications. The idea is you can create an Event Tigger or multiple triggers and then this App service deals with how much resources are need. 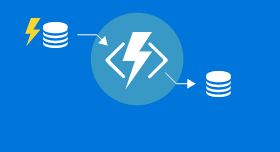 According to me, it’s Microsoft another enhancement in the field of DevOps as it helps the developer to not only build the application but deploy it to the cloud as well without worrying much about the Infrastructure design and management. Azure Functions act as a web hook whose basically job is to connect the two systems to pass on the data or it can also act as the Data processing unit that takes the input data, the function job is to call the processing service and take the output.  It can also acts as a batch process that can invoke on a scheduled interval.

Overall, Azure functions seems to be very powerful with the trend of micro services and Serverless applications. It’s just the beginning, we will explore the potential by getting our hands dirty on it and will share the reviews,